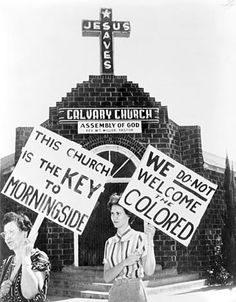 G.T. Gillespie, president emeritus of a Christian School called Bellhaven College in Jackson, Mississippi, gave a carefully worded  message to pastors there,  titled “Christian View of Segregation”  He admitted that “The Bible contains no clear mandate for or against segregation as between Negro and White races”. He conveniently  used “natural law” to explain the need for the separation of races. He said that birds of differing colors or species never mated, such as the blackbird and white dove.  He went on to say that scripture did account for separations, like linen and cotton cloth and different strains of seeds or cattle. (pgs133-134). Another minister, Carey L. Daniel went so far as to call God “The Original Segregationist” and that desegregation was one of the “schemes of the devil” (134).  They should have been satisfied with the truth: the Bible contains no such mandate about segregation.

Thankfully, there were white Christians who took a stand against the injustice of segregation, but there were more “Christian moderates who were complicit with the status quo of institutional racism.” Thus, racist structures were left undisturbed. My desire here is to line up with the Kingdom of God to dismantle them. The origins of racism and prejudice are darkness and death. Believers are about Life and Light.  This is a spiritual  battle. Although there are integrated churches today, it is said that the most segregated place on Sunday still is the Church!  Real integration and reconciliation begins with leaders who reach out to all people and embrace them entirely, including their stories and their pain.